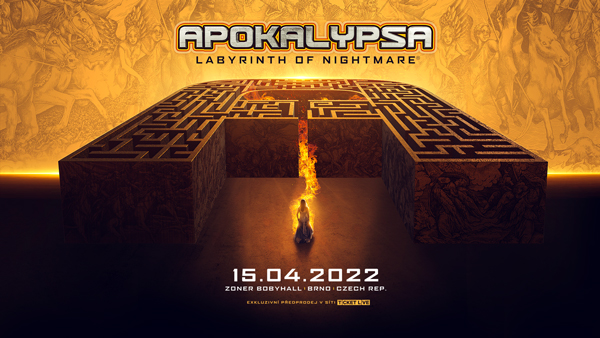 APOKALYPSA will add a spring edition in 2022

We are announcing the date of April 15, 2022 for the spring edition of the Apokalypsa number 49 and the capturing subtitle Labyrinth of Nightmare®.

We think that over the past year we all have really gone through a maze of our nightmares, and who would guess that we can experience something like this firsthand. Let´s close this stage for all of us and come out of this labyrinth together. And from this "wandering field" we will be led by really unexpected names on the main stage of the 49th Apokalypsa!

You can look forward to a thematic and visual part full of abstractions and a thematic story, which will be guided by a headliner, which few of you would expect that we will be able to attract him to the stage of the Brno Bobycentrum! And with his help, we will give check mate once and for all to everything we have had to experience in the last 2 seasons! And believe us, we'll get off to the ground and pull our aces up our sleeve.

INFORMATIONS ABOUT THE PERFORMERS BELOW:

We present the first performers at Apocalypse Labyrinth of Nightmare®! Inspired by 90's classics, Italian techno will be brought by ANGY KORE & Gabriel Padrevita, who grew up during the covid pandemic, where their livestream videos became literally a hit. Their humorous concept of DJing and shows is unusual on the underground scene, but all the more fun and exciting. Their dominant feature is Italian techno, which takes inspiration from the classics of the nineties. Their set will be enjoyed by both connoisseurs of the older underground scene and fans of modern sound.

For the first time, we are bringing to the Czech Republic one of the fastest growing stars on the world scene, she comes from Ukraine and every techno fan knows her under the artistic pseudonym XENIA. It presents current and modern techno with elements of the old rave, which entertains the crowds at all world festivals. It is no coincidence that this artist is booking at major events around the world (by the way, her home agency also represents Carl Cox or Monika Kruse) and her name is growing rocketing! We are sure that we will take you the future princess of the new techno generation!

Master Gary Beck, who has introduced himself at the Apocalypse in the past, will take care of the big return, and his name was very often inflected as one of the best sets to be heard on Ačka. Gary is a fixture at world festivals and in the best clubs. A native of Glasgow, producer and DJ is one of the leading techno figures. Known and especially acclaimed for his unique sound, he has gained support and recognition among the people on stage and publishes on respected labels such as Drumcode, Cocoon and Saved, as well as on his own label BEK Audio imprint. It is not for nothing that he is one of the most sought-after artists from the ranks of domestic fans. We are glad that you enjoyed Gary's set, because he enthusiastically agreed to play in Brno. The Scottish hurricane is heading to recharge the Bobycentrum fortress!

DVS1 confirmed for Apocalypse Labyrinth of Nightmare® A Russian native who permanently lives in the USA (in New York and Mineapolis) presents pure, "metal" techno and is an avid collector of vinyl records (he has more than 30,000 pieces in his collection), which he will certainly use at the Apocalypse. In the past he has performed at major festivals such as Decibel and Dekmantel, for his sound and surgical mixing he regularly performs alongside such stars as Jeff Mills, Ben Sims, Robert Hood and Ben Klock, it is no coincidence that his professional home is the famous Berghain club. He is also the owner of the Mistress Recordings label, which publishes releases to the most talented artists, such as Anhony Rothera.