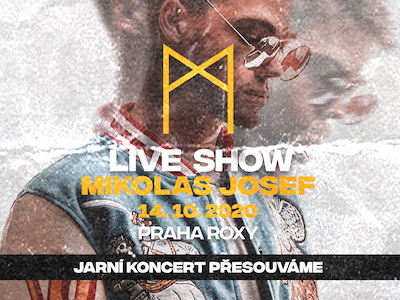 We received information from the Mikolas Josef's concert organizer about the change in the date of the event. The original date of the concert on 14 October 2020 has been moved to 1 June 2022 in Prague (the venue will be specified).

Due to the fact that the dates in the autumn and winter period are uncertain and due to the foreign production of the concert and the participation of South African and Austrian members of the group, the organizer chose an alternate date to prevent further changes. We will ensure the possibility of participation of all members of the band and we will allow you to avoid complications well in advance and we will not expose all dangers or restrictions on participation.

Your tickets will remain valid for a new date and do not need to be changed.

Mikolas Josef's Christmas Tour 2019 in four Czech and Moravian cities was a huge success among fans and critics alike. Mikolas adds, "the interest of the fans in the Christmas tour was bigger than the capacity allowed, so we are returning to Prague in April. I am so looking forward to once again experiencing the great energy we experienced on the tour."

For his fans - present and future - Mikolas is preparing a unique show full of dance and surprises, featuring his most famous hits such as Lie to Me, Me Gusta, Free, Abu Dhabi, Acapella and of course Colorado, which is currently conquering radio charts in the Czech Republic and Poland.

In November 2017, he released his fourth single Lie to Me. This was his entry for the national round of the Eurovision Song Contest. Mikolas was selected as the Czech representative at the Contest in 2018 based on the votes of the audience and the international jury. He performed in the first semifinal on May 8th in Lisbon and, thanks to the votes he recieved, he advanced to the final of the competition - only 2nd Czech to ever do so. In the final of May 12th, he received a total of 66 points from jurors from individual countries, and in the audience voting he came fourth with 215 points, which meant a total of sixth place and 281 points. It is the highest ranking of the Czech Republic to date, and at the same time the first time the country was able to make it to the top ten.

In 2018 he released another song Me Gusta, which already has over 10 million views.

In 2019 he released a funky pop song Abu Dhabi and after that summer hit Acapella, which received 1 million views within 24 hours of its release.

Mikolas sold out his firts solo concert this year in the 4000 capacity Forum Karlin in Prague. The show featured a backing vocal group from South Africa and 20 dancers, as well as a 4 piece band, professional lightning and pyrotechnics, and 90 minutes of original material. Fans came from the Czech Republic, Spain, Portugal, Austria and elsewhere.

The summer hit Acapella was a hit on almost all Czech radio stations and in the 36th week this song became the most played and most listened-to song in the Czech Republic and the second on the list in Poland as well as first on the Polish shazam.

At the end of November 2019 he released another song Colorado, in cooperation with producers from Canada.

In December 2019 he again impressed with a Christmas Tour called Closer to You in four Czech and Moravian cities.

The successful year 2019 ended with a New Year's Eve performance in the 40 000 Arena Slaśki in Katowice, Poland.