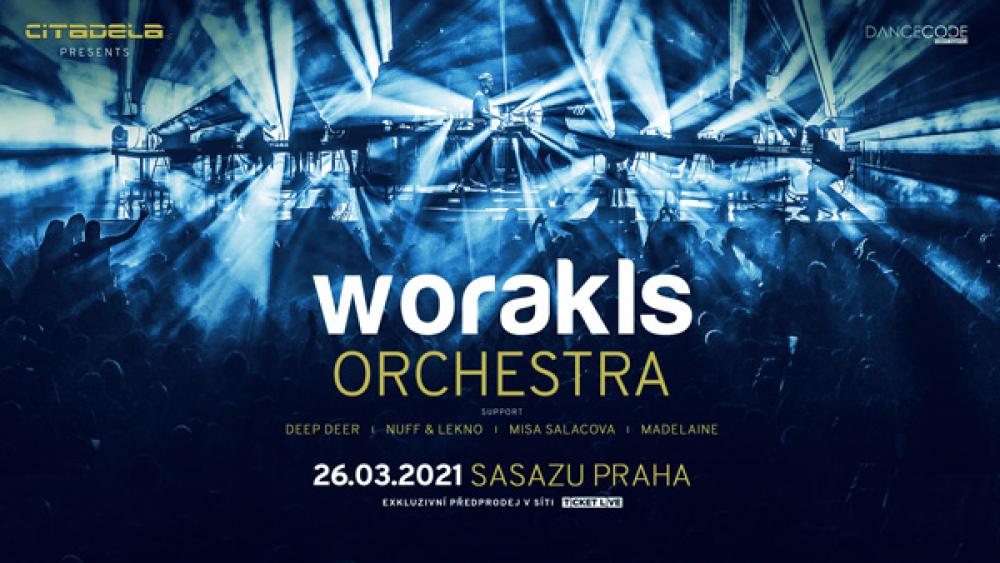 The performance of the Worakls Orchestra in PRAGUE is definitely canceled

We were looking for a replacement performance of Worakls in Prague for you, unfortunately we have to cancel it definitively. At present, there is not enough space in Prague that would meet the capacity and at the same time technically meet the requirements for the size of the stage for the entire orchestra of a French musician. We apologize to all ticket holders and offer an exchange for the Brno performance, which of course applies (term 30.9.2022, Bobycentrum), or we offer a refund, we will leave the decision to you.

The perfect combination of the grandiose sound of a live orchestra and throbbing dance electronics. This is a current project of a French virtuoso hiding under the pseudonym Worakls. He released his debut record Orchestra a few months ago and immediately became one of the most infamous names on the dance scene. Now his show, which has received great acclaim not only from fans but also from the world's top producers, will arrive in Prague. On Friday, March 26, 2021, the project called Worakls Orchestra will be the main name of the special edition of the Citadel event in Prague's SaSaZu. Deep Deer, Nuff & Lekno, Misa Salacova and Madelaine will also perform at the event.

Worakls was born into a Parisian musical family as Kevin Rodrigues. Already at the age of 3, he sat at the piano every day and it was soon clear to his parents that there would be something out of a boy. While studying at the conservatory, he sniffed at electronic music, and the creation of dreamy musical compositions took a different direction than parents might have expected.
"It simply came to our notice then. Worakls tours the world's biggest clubs and festivals with his show. On this year's expected Orchestra album, he has perfected the combination of the grandiose sound of a live orchestra and beating dance electronics, "says Jiří Vymislický, the deputy promoter of the event. "But he has already achieved worldwide acclaim as tracks such as Bleu, Coeur De La Nuit or Toi, which soon became dance anthems," he adds.

Worakls himself describes his project with a 30-member orchestra as its new beginning and a unique opportunity to play the concert in a different "more beautiful and lively way" than his fans are used to. The whole of Worakls' team, which will arrive in Prague on March 26, contains 37 artists and the ensemble itself radiates tremendous energy when entering the stage, and the whole concert is a really energetic and melancholic experience at the same time.

"We are pleased that the invitation was accepted by the brilliant French producer Worakls, who will bring the entire symphony orchestra with him. People like Porto, Salzburg, Bleu or By the Brook or Caprice will hear it live and in a way that will take their breath away” adds Vymislický.

A limited number of VIP tickets are also on offer, including a separate entrance to SaSaZu and access to the gallery.